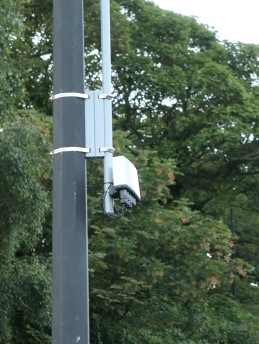 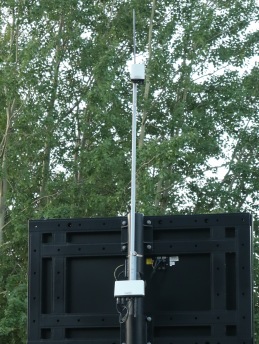 June 20th – Another dusk departure from work gave me chance to take some pictures of networking equipment causing some bizarre consternation locally at the moment.

A handful of local residents have spent some time in the dafter enclaves of social media and decided these white boxes and antenna on lamp columns, traffic signals and street furniture in Walsall are the rollout equipment for the fifth-generation telecoms network.

For some reason conspiracy theorists are given to believe the fifth generation network will be harmful to health, is a plot to test radiation on the population and an effort to spy on us all. Oh, and it’s somehow all connected with low energy LED street lighting.

Well, these boxes and aerials are far more mundane: They are actually pretty much high speed WiFi like we have in our homes, but designed as a specific, peer to peer network for traffic signals and other on-street infrastructure that benefits from central control.

It’s called Mesh4G and you can see it here.

As signals, junctions, crossings, air monitoring and traffic cameras are updated across Walsall, more of these relay units will appear, allowing traffic folk to monitor, modify and control their equipment without having to leave the office.

Which is interesting to me as a geek, but far more mundane than conspiracies would have us believe.

from Tumblr http://bit.ly/2WVgf31
via IFTTT