April 17th – Near Newtown, just near the A5 bridge on the canal, another wonderful sign of spring on a grey afternoon: The swans are nesting here.

This is the first nest I’ve seen in this spot and I think it’s probably the mystery couple from last year who suddenly seemed to appear with hatched chicks, which I think had been incubated in a nest out of sight behind a moored boat.

I noted one bird was supervising while the other did the work. I have no doubt that if the one watching could have folded its wings, it would have done…

from Tumblr https://ift.tt/3bsbrKx
via IFTTT 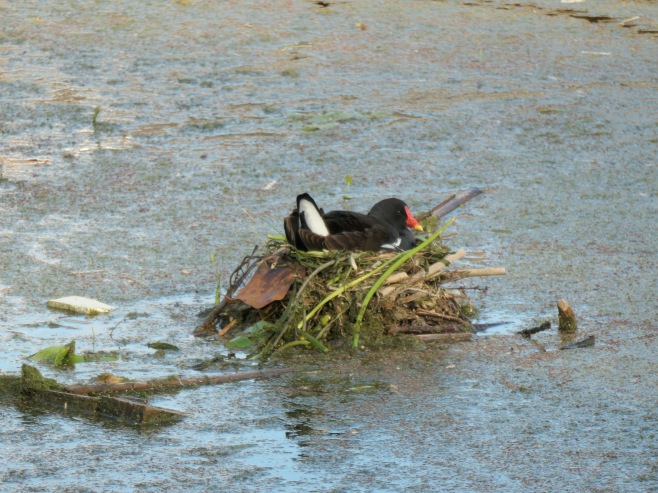 July 22nd – In the middle of the canal at Catshill Junction, in the midst of the algae mat, a mother proudly sits on a nest. A nest built upon driftwood flotsam trapped in the algae.

I’ve been watching her a few days. You can see trails in the surface from her partner coming to feed her, or take his shift sitting.

Safe from foxes and other land predators, this moorhen mum’s got a relatively secure nest.

It’ll be interesting to see how this develops!

from Tumblr https://ift.tt/2YCWcqU
via IFTTT 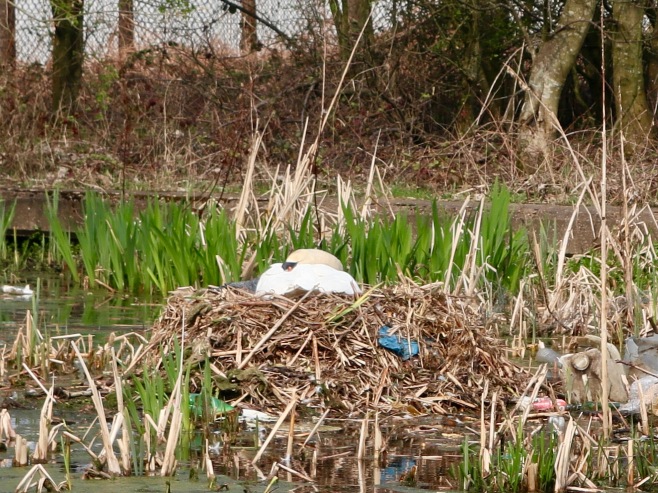 April 9th – A run on the canal through Pleck and Bentley Bridge to check on the nesting swan couple at the former Anson Arm. I needn’t have worried. She was fast asleep in comfort and he was on patrol, threatening to peck my feet on the opposite bank.

This pair usually have small clutches. When the long wait is over, it’ll be interesting to watch them develop this year, as ever.

from Tumblr http://bit.ly/2ImpZj7
via IFTTT

August 20th – One of the sad but beautiful signs of a closing summer is toadflax, otherwise known as butter and eggs. This beautiful plant, in shades of yellow, white and orange will be common now in hedges and on towpath fringes until October.

It’;s a lovely thing but it does make me sad for a season passed.

March 23rd – Passing through Brownhills in the morning, I paid a call on the Watermead swan couple. Not sure if there are any eggs yet, but the nest is looking good and a bird is clearly sitting.

I look forward to watching another batch of cygnets thrive and grow. Exciting times!

May 5th On the way home I took the canal from Darlaston, in the hope of avoiding the worst of the wind. Nearing the factories near Pratts Mill Bridge, I noticed this swan, ostensibly asleep but clearly monitoring me on the far side of the canal, nurturing it’s clutch of eggs.

I wonder if it’s the swan couple that in previous years have nested in the old Gasworks Arm and Anson Junction in Pleck? No sign of them up there this year. Hopefully I’ll be able to catch sight of one of the parents leg-rings soon and find out for sure.

April 23rd – On the canal at Hopwas, a swan nest. The male was stood on the towpath, alternately preening and scolding passers by, while his partner, safely atop the nest on the opposite bank fussed and turned her three eggs to just the right position before settling back down to watch and wait once more.

Swans are such truculent, fascinating birds.

March 12th – I felt awful. Really bad, as if I had the mother and father of hangovers. I’d not had alcohol, and it could have been an MSG thing, but I was dehydrated and groggy. But I had to go out.

I called in at Shire Oak Park to check the frog pools to see if they’d mated there yet – if caught at the right time, that place is like toad soup but today, it was devoid of amphibia – but a heathy patch of spawn in each attested to the frog’s presence at some point.

I was interested in the difference in the frogspawn. I know that frogs produce globular ‘clumps’, and toads ribbons, but the frogspawn seemed to vary from the huge ones in my hand to tiny eggs the size of a small blackcurrant. I wonder why that is? Age and health of the female? Different types of frog?

Never noticed the variety in this stuff before.

May 13th – The Walsall Canal swans at Pleck had hatchlings when I passed them midday; I was very pleased to count four, and I suspected she was hatching more. The cob patrolled on the open water, and the scene was tranquil.

I returned the same way that evening on my way home, to find a drama unfolding. An elderly heron was perched on the rear rail, his beady eye making unfailing eye contact with the cob, who was perched on the nest with his mate. There was clearly deadlock – the heron obviously had spotted an opportunity, but the swans were having none of it.

In a couple of days when grown, they’ll be safe from the herons and other predators, but it’ll be a tense few days for mum and dad as they guard their precious charges.

Nature, red in tooth and claw.

April 27th – A short run of Black Country canal – from Pleck to Bentley Bridge, Darlaston, on the way to work in bright, but chilly sunshine. Mr. Swan was still drifting aimlessly, waiting for his partner to hatch their clutch; it’s nice to see he’s been ringed. Further up, the coots had already got chicks. Coot chicks are probably the most ugly-cute young birds this side of baby owls. Sadly, they were being stalked by a heron, so I don’t give much for their chances.

Off Bentley Bridge itself, a great sky, mirror flat water and the feeling that spring is really on her throne.