July 26th – The very hot weather seems to be coming to an end, timing almost perfectly with the end of the major session of the harvest. Locally now for a couple of weeks, the grumble and whine of fantastically large and complex harvesting machinery has been a continual backing track to rural life, and often I’ve ridden through clouds of wheat dust from this year’s crop being threshed in the harvester.

Not much spilled this year, which is interesting, the roads are usually thick with spilled grain, called ‘gleanings’ as traditionally workers and the poor were allowed to collect – glean – this harvest bounty and they’d feed it to their animals and fowl.

Interesting also to note the return of the rectangular bale. Well, they do stack better.

And with harvest and the end of the heatwave, the year gallops on…

July 8th – A pleasant 38 miler in the evening sun, relaxed and gentle around Chasewater, Lichfield, Whitemore Haye, Fradley, Alrewas and Yoxall rewarded me with a gorgeous golden hour.

In the soft light, the ripening wheat at Farewell glowed in the evening, and I realised that within 10 days or so this crop would be harvested.

It seems early this year – but we have had a lot of sun. I wonder if this weather continues, shall we face an early autumn? I sincerely hope not!

July 7th – Taking advantage of the quiet roads following England’s victory over Sweden in the World Cup, a lift was bagged to near Measham and an unintentional 87 mile fast paced ride up the Cloud Trail to Derby, then back out through Mackworth and the Needwood Valley, finishing long after dark, ensued.

I explored the trail over Sinfin Moor too where I’d never been before, which really was a nice ride.

Not really any time to take too many pictures, but Cloud Quarry’s view from the trail is still jaw dropping, and it’s fascinating to see one end of this immense quarry being filled while basting continues to remove limestone at the other.

The river crossing is always a delight, and the tiny chapel/church at Church Town is a real gem.

I was intrigued by the crop growing near derby – is that oats? Seems like it but they seem a bit – fulsome for that. You don’t see oats about much is Staffordshire come to think of it. Suggestions gratefully received.

A great ride on a hot, quiet Saturday afternoon.

May 12th – Another dull day and one on which I wasn’t feeling so well, so just a short circuit of Brownhills for a couple of errands.

I travelled on the canal past Home Farm at Sandhills, and noted that the crops there were really coming on now. Not just the bright yellow of the oilseed rape, but the shimmering green of what I think is a feed of barley was gorgeous too. Within a few short weeks we’ve gone from winter to late spring/early summer and it’s been like firing a starting gun.

Even on a dull day with an uncomfortable stomach, just the colours of this season are enough to cheer me up.

April 21st – Another wonderful spring flower coming into bloom is the oilseed rape in the fields. All across the rural landscape this vivid yellow brassica is turning the landscape yellow.

The smell is wonderful and it’s just started. The fields are alive with bee buzz and birds come for the feasting bugs.

I love the drama and beauty of this curious crop 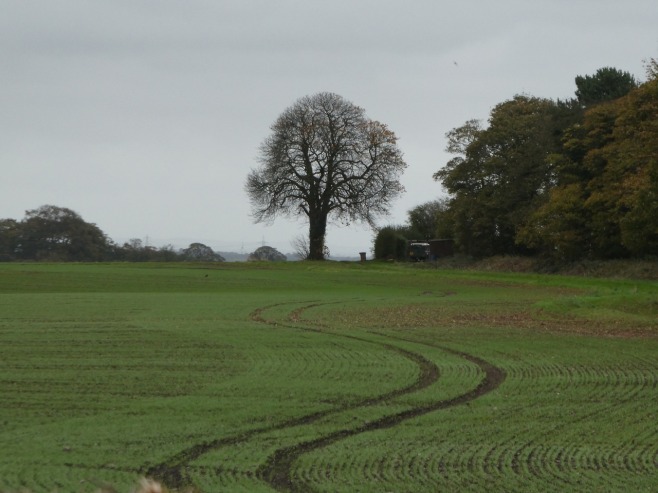 October 21st – Following the winds of the last few weeks, my favourite tree at Home Farm, Sandhills is now bare for winter, which I find profoundly sad.

There’s hope though, in the gloom. Greening up beautifully in a sheet of emerald green are new winter crops sprouting well which will provide some colour in the dark months.

Despite the gloom, life marches on.

September 14th – Further on, still nestling in green, the countryside of Stonnall is beautiful. The harvest is largely over, with just maize and potatoes left in the fields, and the machinery one now sees in the lanes is for ploughing, harrowing and seeding. Near Stonnall itself, the oilseed rape fields are already growing a new crop.

And so, the seasonal wheel turns. As the cold, darkness and winter come on, these fields will slumber until reawakening in spring. It’s all part of the cycle, and the cycle is round.

It’s not been a bad summer. Just wish it had been longer…

August 11th – Not far from Shenstone near Footherley, wheat and barley still languish in the fields, the harvest this year disrupted by poor weather. This crop in particular has started to look grey, and the farmer must be getting anxious. Already blackening, it won’t take much for mould to set in and the crop be ruined.

I hope they have enough dry weather to complete this weekend.

August 5th – A day when I wasn’t feeling great. People I love are leaving for long holidays, which will make my personal life unusually quiet for a few weeks, and I had a dreadful migraine that disturbed my vision and made it impossible to read or concentrate.

I went out late to do some shopping, and spun out to Chasewater along the canal. The day had been squally, but right now there were blue skies and sun, and I admired the fields of wheat running across Home Farm to Sandhills. I guess these will be harvested soon as the adjacent oilseed rape has been, and the cycle resets for another year.

Today, I felt sad, but the sun and air did me good. But inside, the weeks of quiet to come were making me down.

July 9th – I shot down the A5 to Tamworth, heading for Atherstone, because I was late. Just at Streetway, near Weeford, a field of stunning light purple flowers I mistakenly thought were flax. They were absolutely gorgeous.

Alive with bees, I counted 15 species. The flowers themselves seemed to be a lavender-white with purple stamens, and I’ve not seen the like before.

It turns out the crop is phacelia or purple tansy, a crop that’s grown to rest the land and attract pollinators between productive years.

You can find out more about phacelia here. A remarkable and beautiful thing.