Monday, September 28th 2020 – This journal is now so venerable that I feel it has seasonal traditions, and one of the most important to me is it’s devotion to documenting the fungus season with the many photogenic and interesting varieties of toadstool, ball, mould and slime that abound in autumn.

The mycology is tragically overlooked – it’s a huge kingdom completely different to any other, and without it life on earth could not function at all. And when it blooms and fruits, it’s stunning in its otherworldly beauty.

So far this dry autumn, there hasn’t been much fungal action but with showers in recent days hopefully the shrooms will have the trigger they need to emerge.

I’ll kick it all off this year with these humble but beautiful honey fungus, spotted by the canal in Darlaston on my way to work. Hopefully the first of many this year.

from Tumblr https://ift.tt/3cHKFPO
via IFTTT 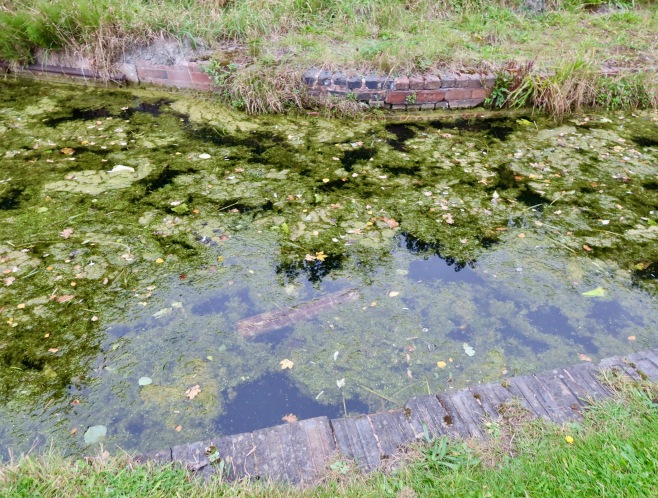 Wednesday, September 16th 2020 – While I’ve been away the canals have continued as they ever were, with small changes. They got very busy with pedestrians and cyclists for a while, a product of fair weather and lockdown, so the towpaths were well worn, and the cessation in mowing gave my beloved orchids a sporting chance this year. But the waterfowl, plants and colours were broadly as ever.

Reassuringly, beautifully, peacefully as ever.

The one change that’s been interesting is the azolla bloom that dominated the water surface in 2019 has largely faded, and in its death left sporadic patches of more traditional clumping algae, which must be a pain for waterfowl and boaters alike.

There are still traces of azolla, which was a surface invasive surviving a mild winter, but it was non-stringy and readily parted for birds and watercraft, but it’s mostly gone.

On a dull, grey autumn afternoon, the green and peace here were so welcome, I felt like I was inhaling them.

from Tumblr https://ift.tt/3iG6WiO
via IFTTT

February 2nd – The Azolla bloom in the local canal, and as it matures patches of the waterway have turned a deep red.

Azolla is a small but populous growth that although strange and invasive, does little harm – it will disappear in spring as the weevils gorge on it. Winter normally sees its death, but after a very favourable summer, the winter has not been cold enough to kill it.

It’s not stringy and parts easily for passing boats and waterfowl.

But it does look very unusual.

from Tumblr https://ift.tt/2S9pxJk
via IFTTT

January 10th – At this time of year, I desperately scan the world around me for signs of the oncoming spring, however small or odd. Today, I spotted one.

This floating root in the canal at Walsall Wood spotted on the way to work is just such a sign. It looks like a random piece of flotsam in amongst the maturing algal bloom which in recent weeks has turned red from green. But this root is actually the front guard for a larger movement.

These roots break from last year’s dead growth and sink to the floor of the canal, then as spring comes, they gain buoyancy and begin to float. They move with the currents, boats, winds, waterfowl moments and eventually settle and sprout roots.

In high summer they will provide a new carpet of the familiar huge leaves and bright flowers for us to enjoy.

from Tumblr https://ift.tt/2sbAJuO
via IFTTT

October 29th – In Telford again, and just by the Priorslee turnoff on the cycleway is a rather fascinating fungi colony growing from an old pine stump on a bank of conifers.

This fungi grows back every year on the same stump, and I’ve never actually found out what is is.

from Tumblr https://ift.tt/34mt0HJ
via IFTTT 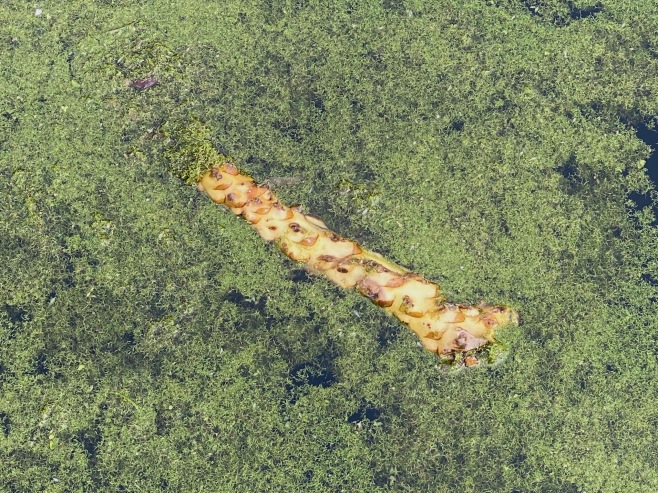 October 11th –  On the way to work on the canal Walsall Wood, I noticed something one doesn’t normally see until early spring: This floating root, probably disturbed by Canal and River Trust efforts to remove the floating algae, is a rhizome of the water lilies that are so profuse here.

This remnant of the summer plant generally sinks to the canal bottom during winter, and when the water warms in spring, it becomes buoyant, floats with other detritus and then takes root, and when rooted, will grow that season’s lilies.

from Tumblr https://ift.tt/2BwDibS
via IFTTT 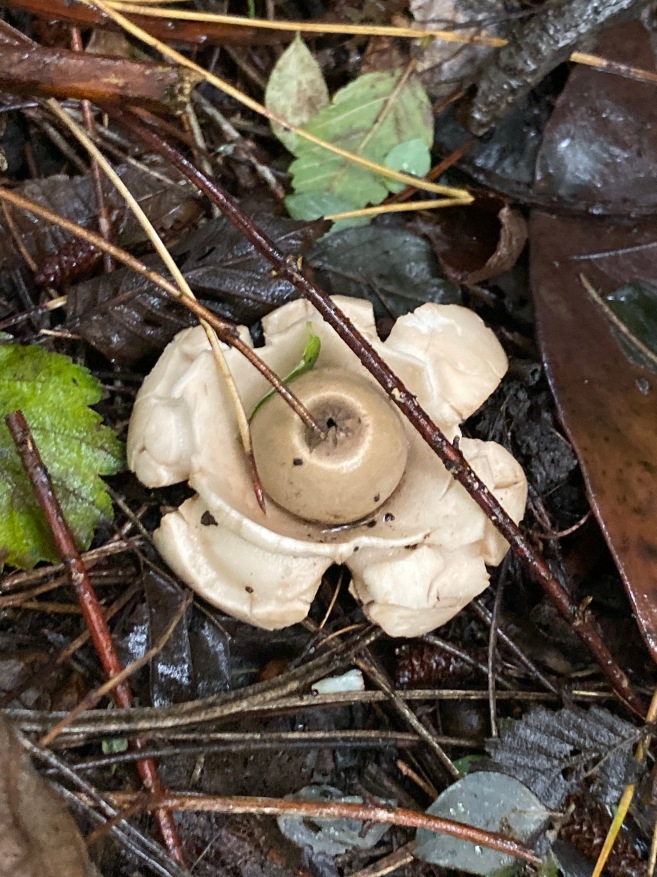 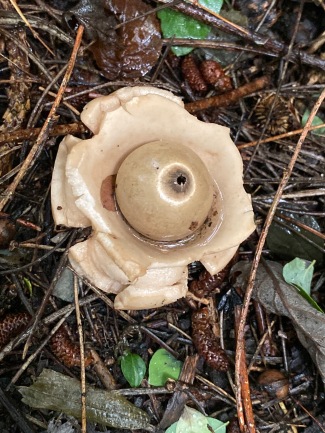 October 1st – I had to go to have a medical procedure, so I was out in a rainy dawn on a quick spin to get the ride in for the day.

On Clayhanger Common, a first for the year: Earthstar fungus.

This remarkable, almost unreal looking fungi grows quite widely now but was once a rarity, and there are lots on Clayhanger Common from now until Christmas.

They work like puffballs, and the central sphere pops releasing it’s spores to the wind.

They always look like plasticine to me. Beautiful, curious things.

from Tumblr https://ift.tt/2oa8LNY
via IFTTT

August 17th – With my fascination with galls, it’s easy to overlook the fruiting of the oaks as it should be, and I’m happy to report this year that the crop of acorns – even though it’s been hit very heavily by knopper gall wasps – is plump and profuse.

The heathy acorns I’ll later gather to spread in hedgerows and on edge lands as is my tradition look better this year than they have for years. I guess a warm but wet season was good for them, if not so much for me.

I always have a dilemma here though: I can collect acorns solely from trees unaffected by knoppers, and assume they have so resistance, but in spreading solely those am I harming the wasp ecology? I suppose I should just spread any acorns I find, but it’s an interesting conundrum…

from Tumblr https://ift.tt/31JzRd4
via IFTTT 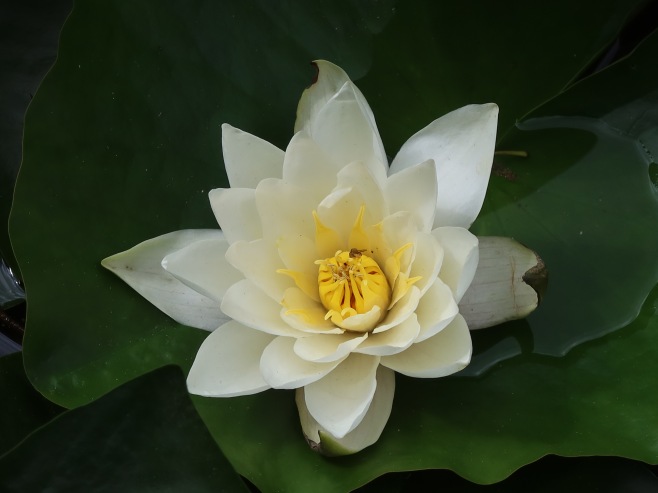 August 12th – On the canal near Silver Street, Brownhills, the perfection of waterlilies. I love how they’re always a bit grubby, or host to insects. Like brightness in extenuating circumstances.

When I was young, we never had these on the canal at all. They are absolutely gorgeous – and clearly keep the pollinating overflies busy.

from Tumblr https://ift.tt/2KAgRbf
via IFTTT

August 1st – Groundsel is a common but interesting weed. It spreads and is host to a number of diseases and lungi that affect other plants, like rust fungi and black root rot, but is also supportive of small songbirds and a host of Lepidoptera.

Groundsel is thought to be mildly toxic to humans.

it’s been known for years that cage birds like canaries and budgerigars love groundsel (and chickweed) and as a child I was often sent to pluck some from the hedgerows for grandad’s budgie, which would devour any proffered without hesitation.

It’s a very hardy widespread weed, and is so common and unassuming, I think it largely exists unnoticed. However, if you actually stop to study it, it’s rather pretty.

Weeds are always worth a look – they can be surprisingly beautiful.

from Tumblr https://ift.tt/2MXeYXz
via IFTTT