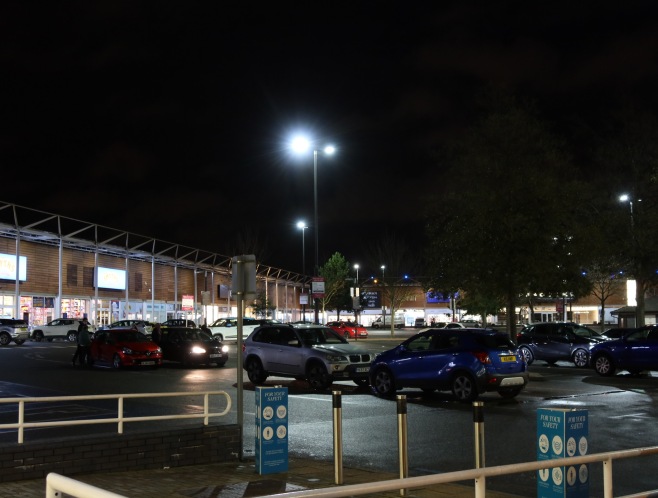 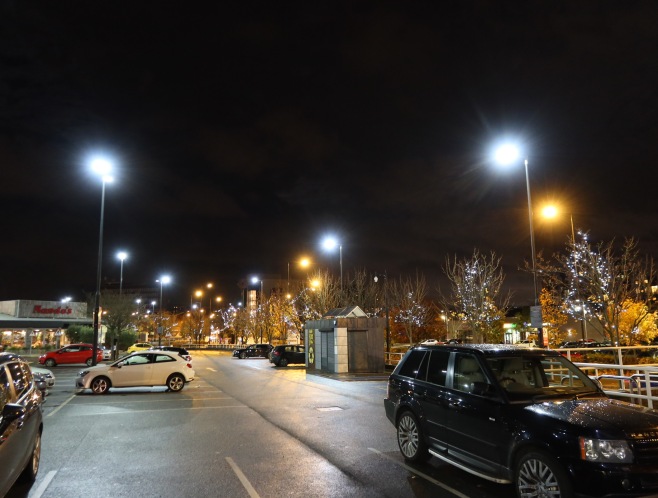 Thursday, October 29th 2020 – I had to visit a store at Walsall’s Crown Wharf shipping Centre – a peculiar, strip parade out of town centre that was curiously built in the town centre.

Crown Wharf is awful: Like all parade malls, it surrounds it’s own car park and seems isolated from the town outside, and has sucked the life and larger stores from Park Street a hundred yards away, which is the town’s Main Street.

It’s incredibly brightly lit at night, and the trees on the Wolverhampton Road frontage have lights in all year around, giving a night-time feel of the worst kind of Christmas shopping all year around.

Crown Wharf is one of those odd, turn of the millennium regeneration projects that didn’t regenerate anything much, and seems cursory and contemptuous of it’s host town and environment, almost as if the architects and designers had learned nothing from Merry Hill twenty years before: A mall surrounded by industrial decay that only served to further suffocate the small towns around it.

I did what I had to, and left. I hate this place.

from Tumblr https://ift.tt/2JpZgEI
via IFTTT

December 6th – I had to pop to the Touchwood Centre in Solihull, a place I’ve only been once or twice: In fact, I rarely visit the town at all.

I left in the afternoon, and as usual of late, the trains were messed up and the journey was horrible. But Solihull had some interesting views in the early evening gloom.

That underpass was stunning in the dark.

from Tumblr https://ift.tt/39haOCX
via IFTTT 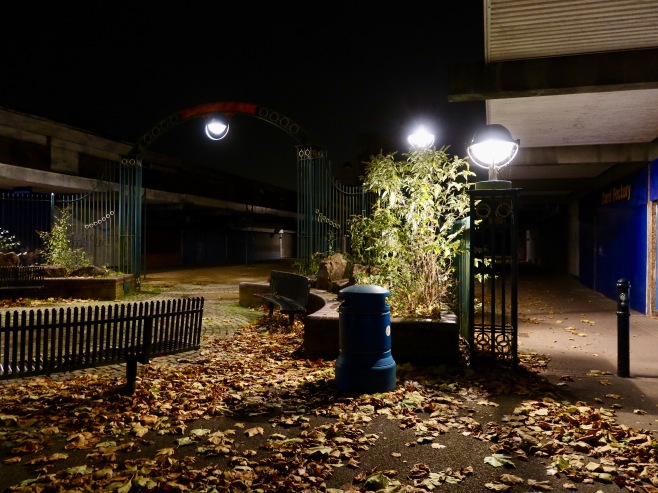 November 15th – It had, at least, stopped raining. I arrived in Brownhills to overcast skies but thankfully, for once, dry.

I stopped to re-tie my lace at Ravens Court, the derelict, abandoned shopping precinct in the middle of Brownhills.

Beyond me in the heart of darkness there are no longer any shops in the place, and it sits, gently decaying, unloved and beyond the reach of anyone who cares to sort it out.

One day it will be gone, and this sad place will no longer be a focus for that which ails our town. But until then, it makes for a very eerie night image.

from Tumblr https://ift.tt/2L6I2KP
via IFTTT 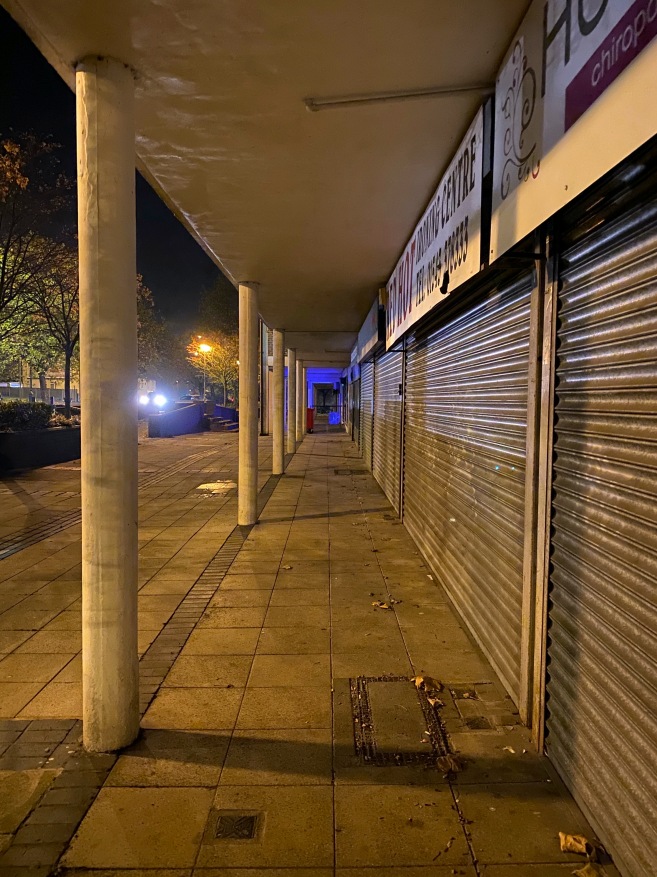 November 4th – Returning from work late, I spun down the High Street as I usually do, riding along the parade of shops called Silver Court. This odd, split level semi-brutalist building is probably in it’s last years now and has never been – shall we say – salubrious at night, but I actually adore it: The forced perspectives and weird lighting effects always make me think of the great Mancunian designer Peter Saville.

I can see this place being swept away before too long, and I doubt many will miss it: Except me.

from Tumblr https://ift.tt/2pJXmFz
via IFTTT

December 19th – I rode to Rugeley from Lichfield, hoping to pay the food market a visit, but due to the awful weather it seemed to be packing up. Rugeley itself though was very festive, and I spent an enjoyable few hours shopping, getting something to eat and just wandering around. Rugeley is doing better than many similar sized towns, mainly due to the huge area it serves – with two indoor markets and plenty of little independent shops the place is a hidden gem.

The train layout is actually in one of the indoor markets, as a festive attraction. The Timesaver bus is a nice touch.

Despite the grey dampness, it felt a lot like Christmas, and I felt distinctly festive as I hauled my way back over Longdon Edge.

My apologies for the poor picture of the wee dog, but that was the only image I managed to get. I fell in love with him!

January 26th – Passing through Kings Hill in Darlaston whilst nipping into Wednesbury, I noted that the former Servis factory site – nothing but a pile of rubble for a few years now – was subject of a planning application for 250 homes.

Which is good, really, because we need them. But…

Servis was a big employer in Darlaston for many years, and was originally part of Wilkins & Mitchell, who made power presses and other machines. Servis stuff wasn’t great quality, and they didn’t modernise, despite pioneering electronically controlled washing machines. In the 1990s the company ran into trouble, and was bought by Italian white-goods giant Merloni, themselves crashing in 2008. Since then, the brand has re-emerged under a Turkish badge-engineering parent company.

The factory was razed, and lay pulverised as a testament to the economic rough seas Darlaston was enduring; as the factory was carried to dust, Councillors and regeneration wonks pronounced this site would very soon see a retail and leisure renaissance.

There was soon to be an election, and one must suspect this was the usual electorate-buttering bullshit; the rebirth never came, and like the Exidor factory up the road, it’ll now become homes.

Kings Hill – once the beating industrial heart between Darlaston and Wednesbury – is slowly becoming reclaimed by housing.

January 14th – I had to pop to a store in Crown Wharf on the way home, Walsall’s retail park on the fringes of the town centre. I hate the place with a passion – built on a very inhuman scale, it’s horrid to walk or cycle around, and appears to be solely designed without any aesthetic merit purely to extract cash from consumers whilst doing as little as possible in the way of accommodating design.

At night it’s even more grim than in the day. A place utterly without redeeming features.

August 21st – Other people’s bikes. In Lichfield for an early meeting, I took lunch and cycled home after a mooch around town. The town – despite the arrival of Debenhams – still seems to have a lot of empty retail space, and many of the shops I used to pass time in have now gone – the bookshop, Jessops, the Sony Centre. It’s quite sad.

Different from Brum, there’s more of a utility cycling vibe in Lichfield than the big city. I see a lot of older folk on Pashleys or cheaper imitations, and there are many odd hybrids of multiple flavours. I noted this great trike – is that a saddle or a sofa? I took an interest in the Dawes Streetwise – an odd mongrel design of a bike. Partially lugged, part welded frame, roller hub brake on the rear, V-brake on the front. Nexus hub gears. They are heavy, basic city commuter bikes – but this one is clearly loved and very well used.

Most of the bike space around the retail areas was full. This is impressive.