October 19th – The sweet chestnuts have had a good year. In this country wild or urban trees rarely get the conditions to produce edible fruit, but on a journey to Tipton I found these near Brunswick Park, Wednesbury – still very thin but some of a size that contained a thin, edible nut.

I’ve not seen that before.

The boughs are laden and the windfallen fruit litters the footpath, the spiny husks looking like debris from some dinosaur shedding its skin. The nuts, however, are proving a delight for the squirrel population who are busily engaged in eating and planting the next generation of sweet chestnut saplings.

from Tumblr https://ift.tt/341U3Iu
via IFTTT 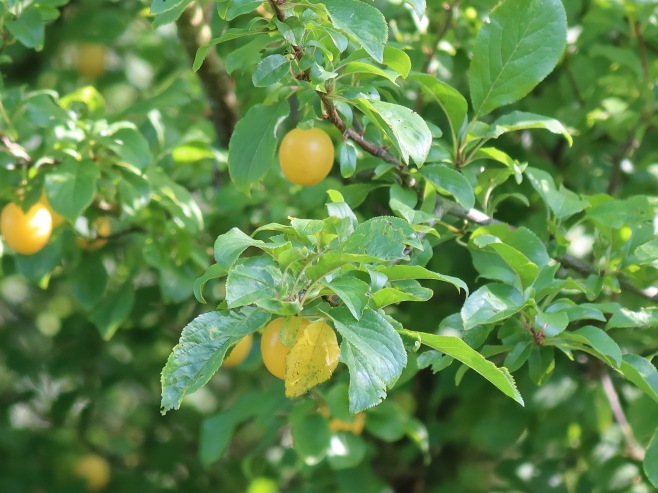 August 7th – Spotted in CLayhanger on the way to work, bull aces or wild plums. Slightly larger than cherries, a beautiful, edible old English fruit the slides in and out of fashion as new generations discover it.

Often sent and tasty, these seem to have had a good year., and will soon be ripe.

I’d probably think twice about eating these, though, given the reclaimed nature of the land they grow on…

from Tumblr https://ift.tt/2MZ9YC4
via IFTTT

June 24th – When I left for work on a decent but grey Monday, I took to the canal with a heavy heart.

It wasn’t long though before something cheered me up – the Walsall Wood swan family, chirruping to each other as they begged for treats in Walsall Wood.

Such a cheerful, delightful family, always under the watchful eye of mum and dad.

from Tumblr https://ift.tt/2FA5JbC
via IFTTT

September 25th – Again returning through Stonnall, I stopped to take a look are the venerable, reliably productive sweet chestnut that is always so beautiful on the corner of Main Street.

Always laden with nuts in their prickly, fur lined husks the tree is healthy and always fruits well; but sadly the climate in the UK isn’t favourable for producing sweet chestnuts, so the kernels are always small and thin.

October 10th – Another abundant crop is the sweet chestnuts on the tree at the bottom of Main Street, Stonnall, which are now ripe and falling to the ground. This is always a productive tree, and the soft, downy insides of the husks contrast with the intensely spiky, hostile exterior, but it does look oh so cosy to be a sweet chestnut.

As usual, the nuts are not big enough to eat, as the fruit doesn’t grow well in the British climate, but the tree is stunning and an interesting, handsome curiosity.

May 28th – A recovery day. I didn’t do much, but had to be at a function in Burntwood in the afternoon, so I pottered there in the sunshine of a breezy afternoon along the canal and via Chasewater. I’ll never tire of the stretch between Anchor Bridge and Chasewater; so varied in such a short run; urban gardens, rolling countryside. Green fields, open heath and factory yards. It’s all here, and all rather splendid.

My Horse Chestnut tree at Home Farm – my favourite, and my overseer of the year – is currently in glorious flower, like most conker trees. At the Chasewater Cottages, young rabbits regarded me watchfully from the buttercup-strewn lawn. And in a waterside garden, I loved momma and children scarecrows.

I’ll never love a stretch of canal more than this.

October 17th – Halloween seems to be getting bigger and more commercial every year, and this year, the hype has started particularly early.

It’s nice to see the popularity of pumpkins, though, as I adore the orange gourd, particularly as soup. In Lichfield, I loved the two carved ones on display at the greengrocers.

A nice touch that made me smile.

February 18th – A sweet and sad little mystery in Kings Hill Park, Darlaston, I noticed whilst taking a shortcut back from Wednesbury. A young sapling, not long planted in the corner of the park. Surrounded by daffodils getting ready to bloom, a unattributed heart-shaped wreath, and a single red rose.

I have no idea. But it caught me unawares on a sunny, springlike morning. Sad, and yet so sweet.

July 3rd – Cleavers, or sweethearts as they’re colloquially known hereabouts are fascinating little things. A creeping, grippy weed, it elevates itself from the ground by hooking on to other plants with it’s spiny, sticky hairs. The seeds themselves employ the same mechanism of almost velcro-like attachment, adhering well to clothing, feathers and animal fir.

The owners of dogs and cats with longer coats will know well the hours spent picking these devilish little balls out of their animal’s hair… but as a seed dispersal tactic, it’s brilliant, as animals preen the seeds out, and they germinate where they land.

I’ve no idea what the bug is, but he’s an interesting wee thing. 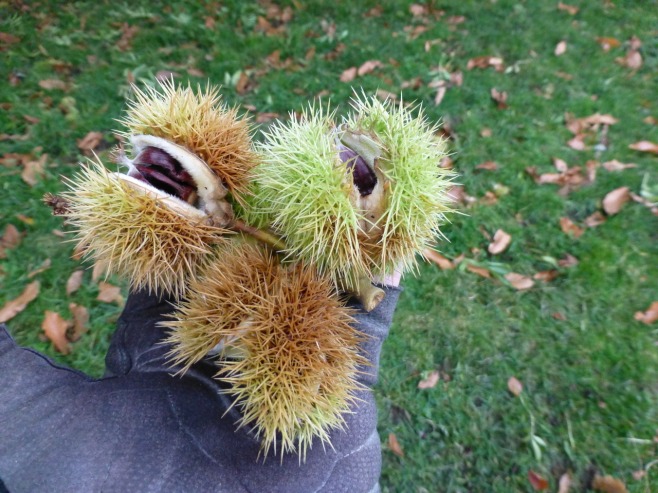 October 21st – I see lots of sweet chestnut trees about – particularly around Shugborough and Longdon, yet little decent fruit, which has always puzzled me. This year in no exception. Inside these very sharp, defensive husks, the chestnuts are thin and small. I don’t know if they’re just an ornamental strain, or whether the crops need more attention than they get in the wild. Still, the windfalls are always impressively spiky.