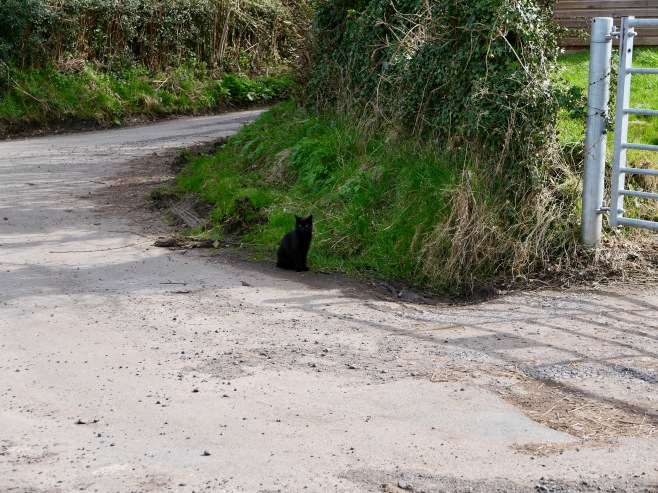 Monday March 29th 2021 – When I said here the other day that I’d been riding home all the way from Telford I had a message telling me I must be mad. I strongly disagree. I’m getting more bike/open air time, my mental health is improving daily as is my physical heath. This lockdown porkbarrel will not be in a hurry to depart at my decrepit age, I can tell you. It needs this kind of help.

It isn’t that far. I wouldn’t do it in bad weather, or if very tired. There’s always the rail alternative. and there’s the sights one sees: Like today. Riding near Brewood, the plethora of pheasants were tricky from a safety point of view (they have no road sense) but they are such handsome birds and their antics can be hilarious.

But I had most time for the tiny black puss I met on the edge of a stable yard at Coven: In beautiful condition with the kind of piercing green eyes that make you feel guilty for the sins of your elders. Puss sat her ground (sure she was female) and stared me out resolutely. She was gorgeous.

That’s all win while the weather is so nice.

from Tumblr https://ift.tt/3cAFzGp
via IFTTT 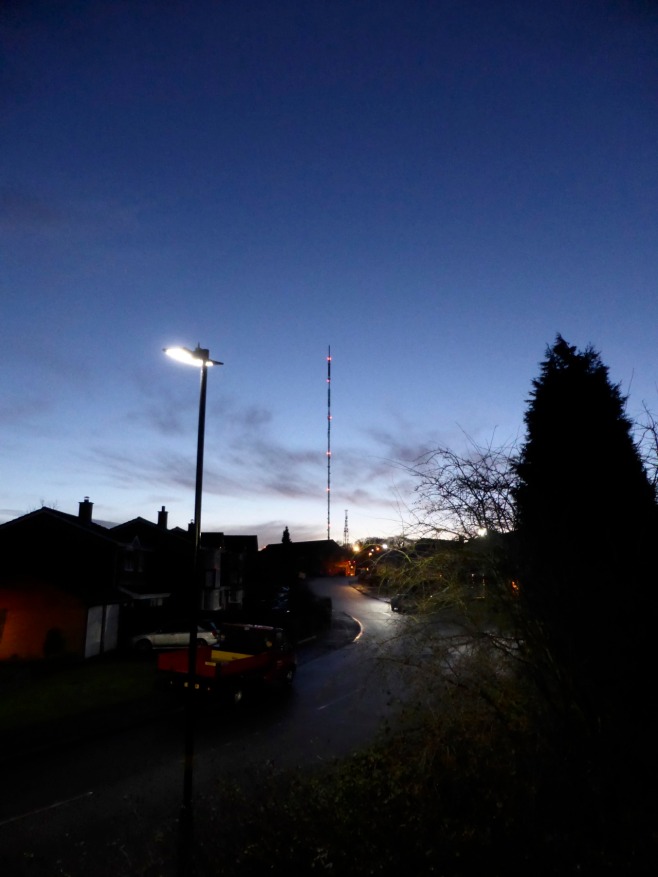 January 2nd – First day back to work, and a lovely commute. The roads were quiet, and the weather reasonable. I just got time to take a quick shot of the dawn over Hill Hook and the Sutton Transmitter. It’s somewhat out of focus, but not too bad. I felt good, and despite the trains being abysmal, it was good to be back.

It felt doubly magical, because this is the second birthday of 365daysofbiking. I actually started the project in April, 2011 in order to ride every day of the 30 days of April, mainly to stop fellow twitter cyclist Renee Van Baar from nagging me about it. At the end of that month, i was enjoying the thing so much I carried on, and vowed to make it 365 days.

Sadly, over the new year of 2011/12, I suffered bad food poisoning, and was off the bike for two days. I was gutted, and so feeling cheated, I started again. 2nd January 2014 – today – was the second anniversary of that resolution.

Last year I agonised over whether to continue, this year I don’t. The eagle-eyed may have noticed I installed a hit counter here a couple of weeks ago – just under the search box on the right. That tells me lots are still reading this, so it seems worth continuing, and it’s part of me now. The urge to get off the bike, stop, and look around is now so habitual that I don’t think I could really stop.

Thank you for riding it with me. As long as people are enjoying this, I’ll keep doing it.

Your comments are, as ever, welcome, even if it’s just to tell me to shut the hell up…