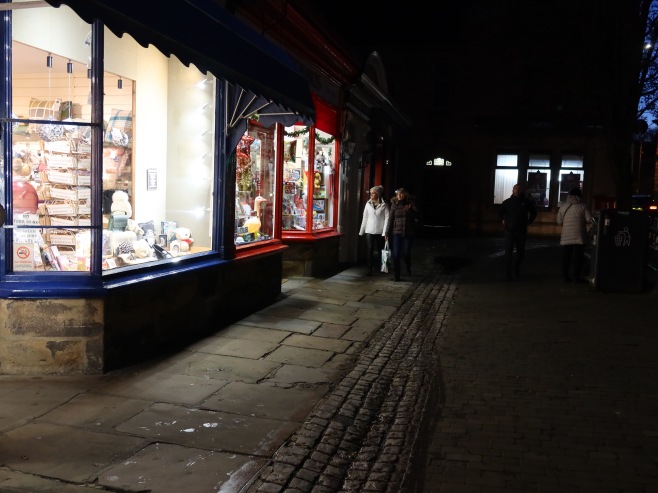 December 23rd – And on, from Ashbourne to Matlock, then Bakewell. Bakewell was a different proposition – night was falling, and there were early revellers around (including one in a rather fetching sprout suit)…

In Bakewell it was Christmas: Bitingly cold, with beautiful lights and a hushed air of determined shopping. The shops themselves were gorgeous.

Several hours were spent before returning for home. A great pre-Christmas trip.

from Tumblr https://ift.tt/2u0SmOw
via IFTTT 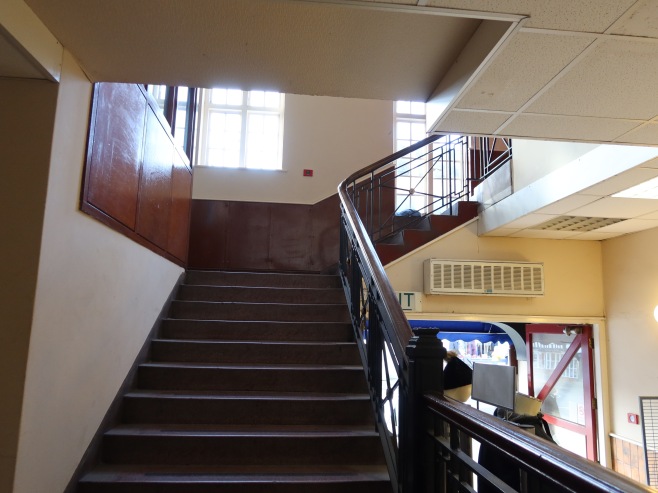 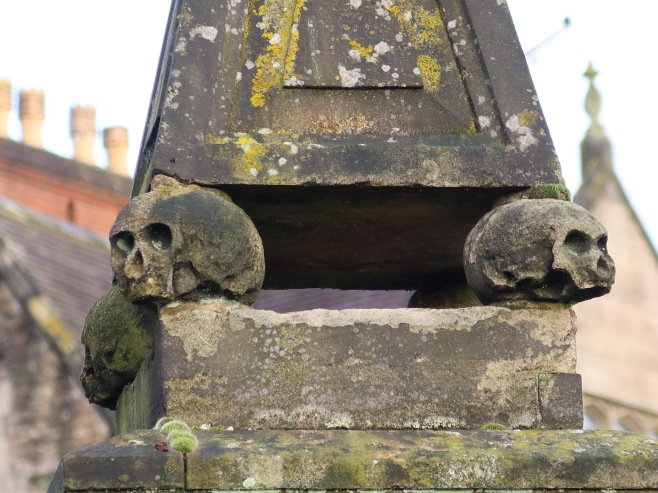 December 23rd – It’s now traditional for me to have a day out somewhere different before Christmas. Today I visited Ashbourne, a place I’ve passed through lots but rarely stopped and studied.

The architecture and frantic air of business was fantastic, but what I really liked was the small, eccentric details: St Oswald’s Church with the afterthought clock and gothic gateposts with the skull detail. The Art Nouveaux staircase in the entry to an outdoor shop.

This little, but very dense valley town is utterly gorgeous. I must return at a more relaxed time.

Oh, and the cycling content? I test rode a new bike while I was here. Wel, a couple actually but that’s another story…

from Tumblr https://ift.tt/37ldcGP
via IFTTT 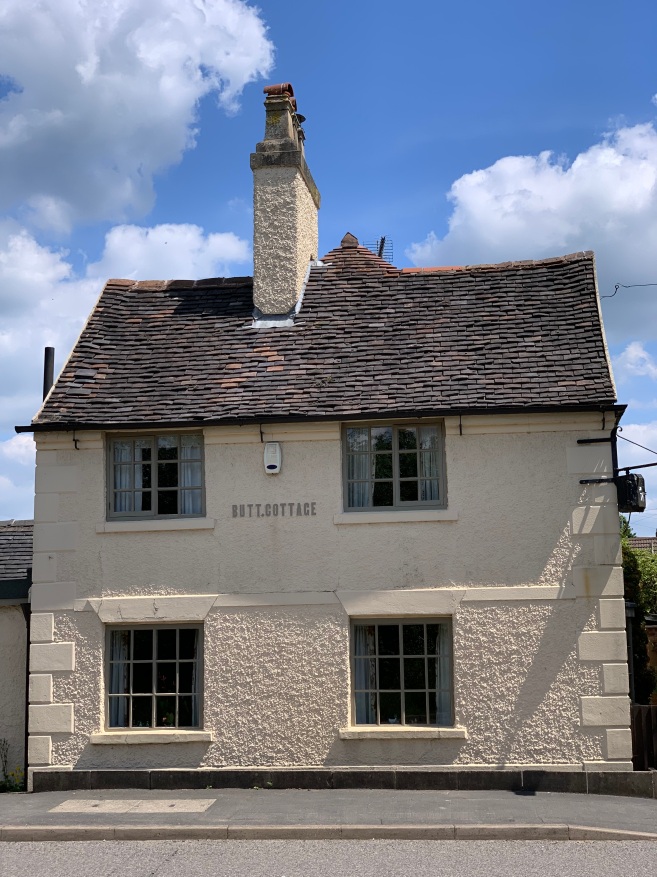 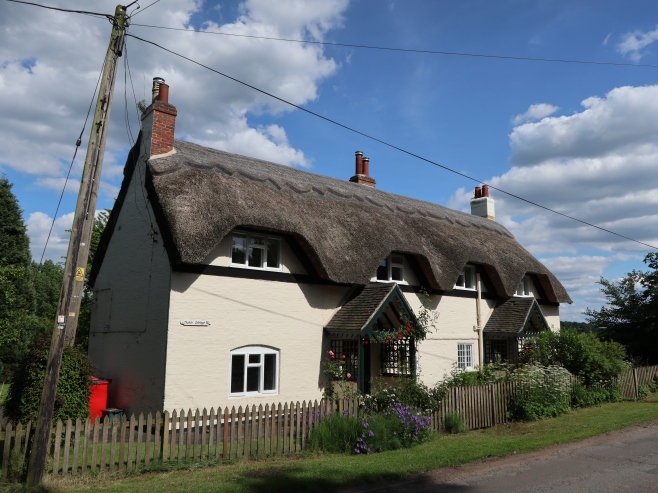 June 22nd – A hurried, fast three hour ride out to an event I’d not been to before – Ashby Steam Fair at Boundary, between Swadlincote and Ashby de la Zouch. A fine day.

The fair itself was excellent, and probably the best I’d ever been to – and after I carried on to Calke, Staunton Harold Reservoir, Melbourne and then into Derby via National Cycle Route 6.

I’m always charmed by a decent steam event, and this one was terrific; not least for the sheer diversity of collections, exhibits and pastimes on display.

You can see a full gallery of that on my main blog here.

I left Derby on Route 54 and returned via Rolleston, Anslow, Barton and Lichfield.

It was a great day, and Staunton Harold was just as peaceful and as beautiful as ever it was.

from Tumblr https://ift.tt/2Nle5tQ
via IFTTT 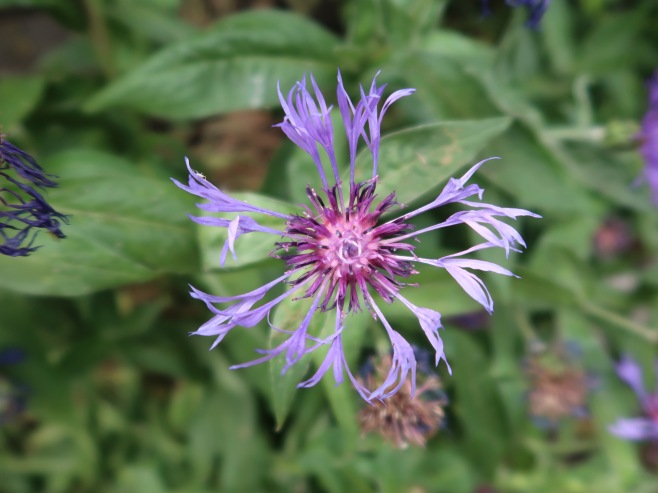 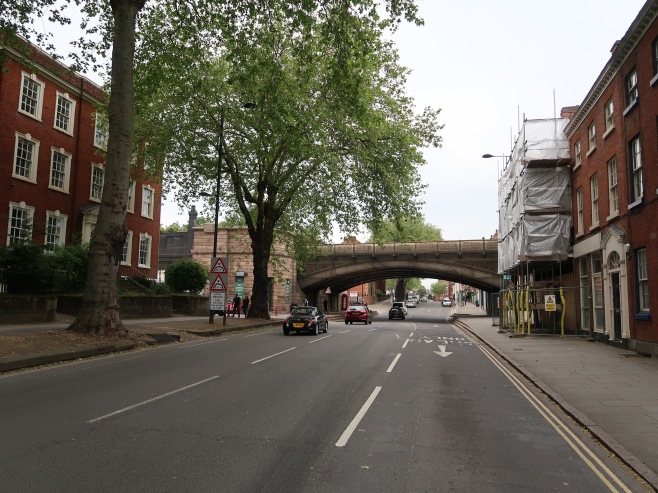 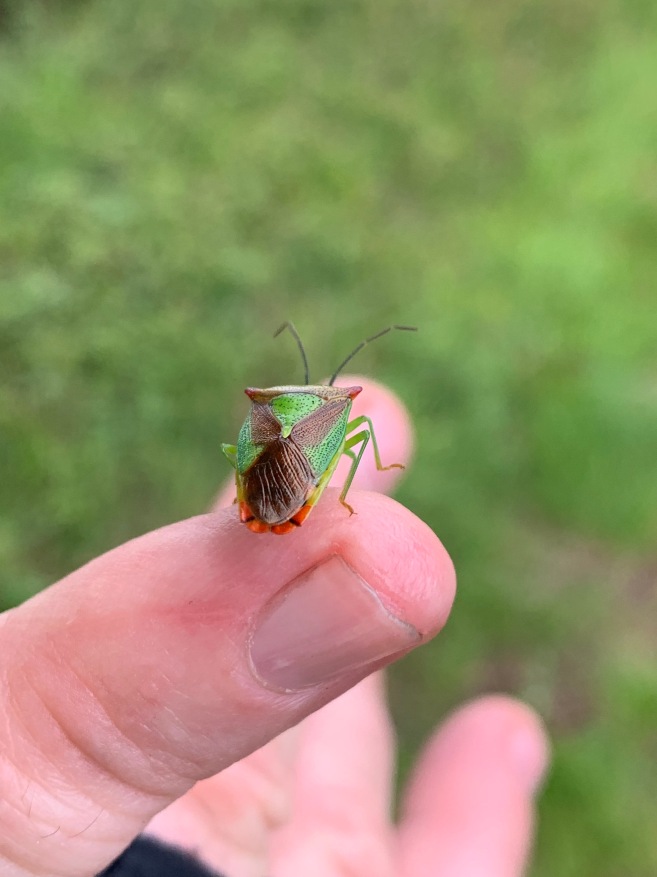 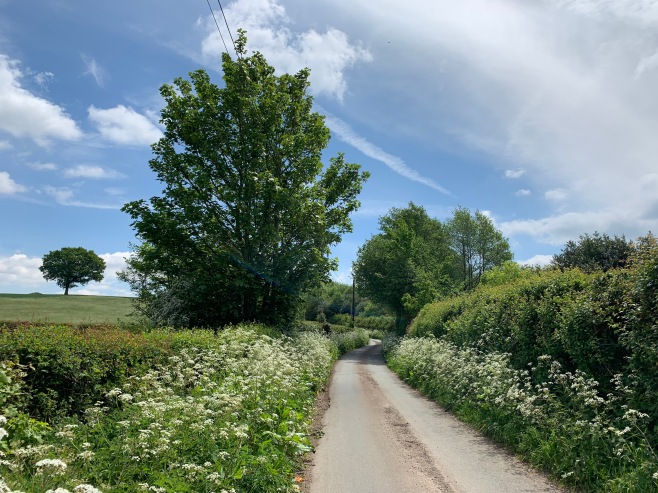 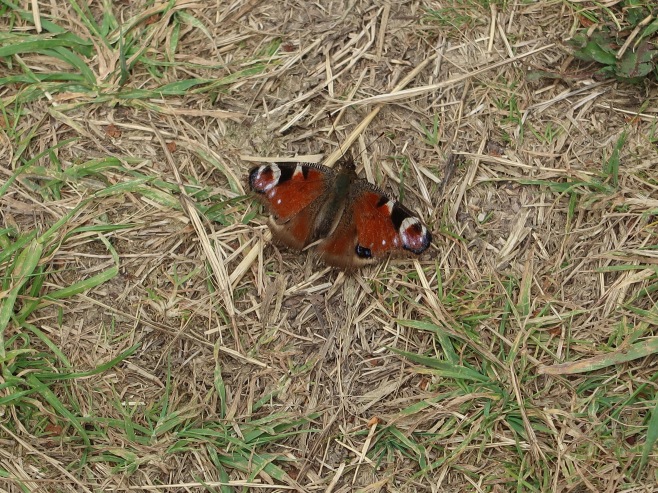 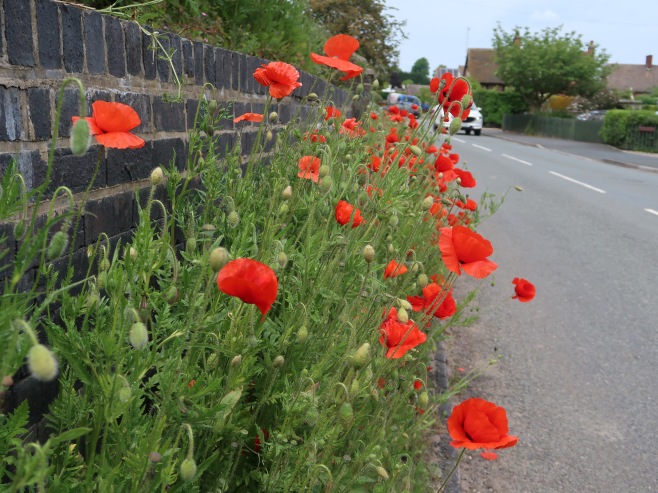 May 25th – A 93 mile dayride that was very, very challenging.

It was a nice day – not too hot, but sunny enough to get a tan, and I set out mid morning, to follow cycle route 54 to Derby – from there on route 6 to Worthington and Cloud Quarry, then back via Packington, Measham, Harlaston and Whittington.

The day was lovely and the ride excellent, with plenty to see: NCN 54 has some very pointless twiddly bits, but I did them all for old times sake and enjoyed every inch. Sad to see the development at Tattenhill, but time must crawl I guess. Falling in love with Derby again was a bonus.

NCN 6 is still one of my favourites: The run out of Derby then past Melbourne is one of the best routes in the country and a genuine joy. My only criticism is it’s time to cut the vegetation back from the viewing area at the quarry again – that stunning view should be maintained if possible.

The challenge was I’ve only ever ridden this in the opposite direction, and all the hills came at the end, and on top of some grim stomach cramps. But I prevailed and it was fantastic.

from Tumblr http://bit.ly/2HJumUH
via IFTTT 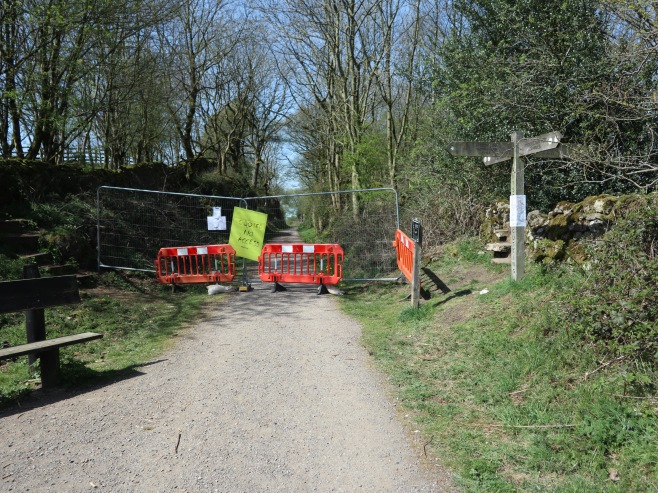 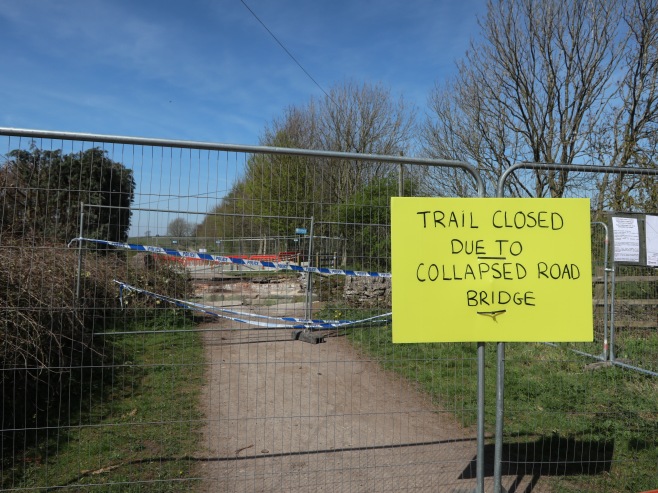 April 20th – I didn’t think anything could annoy me on such a beautiful day. I didn’t counter for the absolute jobsworthyness of Derby County Council employees at their most officious.

At Longcliffe near Brassington, in an accident with a too-tall HGV the previous Wednesday a bridge had been completely wiped out under the High Peak Trail – clearly not the fault of the authority who moved quickly to make it safe and fence off the danger.

On this sunny holiday Saturday, the trail was busy with riders enjoying the sun. Was there a posted diversion? Was there heck. Nothing. Asking at the trail centre at Middleton Top I was told ‘I’m sorry I’m not allowed to offer advice on bypass routes’ immediately after them asking if the y could help me.

At the site itself, an officious, pompous man from the council informed me that there was absolutely no way around and I should go back from where I came. Looking at the map I found an easy public right of way off the trail and a way back on a couple of hundred yards further up.

Derbyshire Country Council, the High Peak Trail is one of your tourist earners. Cyclists come from miles around to ride it. Had this been a road, a diversion would be in place within an hour. On this you were rude, unhelpful, officious and useless.

from Tumblr http://bit.ly/2UVESjP
via IFTTT

April 20th – First dayride of the year on a glorious spring day racked up a decent 188 miles.

Leaving at dawn to return in the evening, a run the length of the High Peak and Tissington trails and then over the Weaver Hills was just what the doctor ordered although I was exhausted at the end of it.

The rout was broadly Lichfield – Burton via Whittington and Walton; Derby via Findern; over to Keddleston Hall where I opened these majesticic gates to cross the hall grounds. From there, Mercaston to Kirk Ireton, joining the HPT at Middleton Top.

Return was via Rochester, Abbots Bromley and Handsace.

I have missed having the Peak District in my life so much.

from Tumblr http://bit.ly/2GA0Sqt
via IFTTT

May 5th – In a world of fakery and things not as they appear to be, this really shouldn’t surprise me, but I was stunned.

On a building site near Rosliston, South Derbyshire fake chimneys, ready to go on the roofs of very expensive new build houses, complete with pre assembled pots and flashing.

October 6th – For all my (uncharacteristic) shoe-gazing, there was brightness; in the nasturtiums growing from a pavement fissure near a cellar hatch; in the flowers of the River Gardens and it’s rather cheeky robin, and in the swans and their goose-pal napping where once rowing boats were hired.

The love-lock restriction amused, as you’d need a seriously large one to clamp on the Jubilee Bridge, and the cleverly named coffeeshop made me double take.

It was an afternoon as English as tuppence, really, and I did rather enjoy the self-indulgent introspection of it.

October 6th – For reasons too complicated to go into here, my moaning about the daily routine and the greyness of life and the weather were heeded by fate and I found myself visiting Matlock and Matlock Bath in the afternoon on a work related trip. Having to leave a vehicle behind, I’d taken my bike and had a ride down the A6.

Matlock is a nice enough town, with some great architecture, but could do with a little more variety in the shops. But I have to say on the whole it’s a classic Derbyshire river-valley town; beautiful, unpretentious and charming.

Further south, at Matlock Bath, things were a shade more grim. Matlock Bath seems to have been in steady decline since I first visited the place in the 1980s. A tourist stop off and motorcyclist haunt, this odd little town clings to the Derwent gorge with an air of faded, seedy seaside glamour. There must be eight or more chip shops; several sweet shops selling exactly the same stuff, and more than a handful of jaded amusement arcades and pubs.

The architecture and riverside are beautiful; but there are many closed shops and it’s hard to escape the feeling of something passed from life, if not exactly to death, then to some sort of ghost existence.

But then again, it’s possible that Matlock Bath has been like this ever since it’s heyday in the Victorian years. The place reminded me of one of those lost seaside resorts that were once locally popular but now are only half remembered, like Rhyl or Withernsea.

Perhaps it was the season and the weather, but the sadness of this place was almost enjoyable.

Perhaps on a sunny, summer day it acquaints itself better.